Looks great on him. 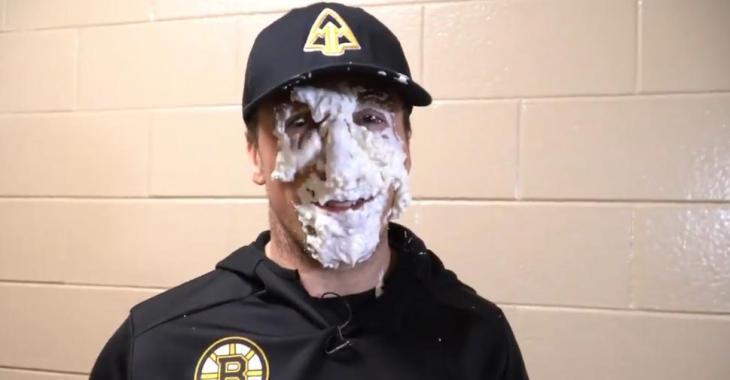 You have to hand it to Boston Bruins forward Brad Marchand, although he comes off like a complete jerk out on the ice he can often be spotted off the ice working for the betterment of his community and this week featured yet another example of that.

Fans love seeing Marchand, who remains to this day one of the most hated players in the National Hockey League, with some proverbial pie on his face but they likely weren't expecting to see the real thing take place on Friday. Marchand took to social media after being challenged to participate in what he describes in the video as "The GP Pie Face Challenge," a movement that aims to raise awareness for gastroparesis, a disease which causes partial paralysis of the stomach.

The challenge is exactly what you would expect it to be given the name, and although Marchand was the one doing the pieing in this video he was also the one on the receiving end of that pie as well. Now I would never disparage an athlete based on their looks but it is no secret that Marchand sports a prominent nose. That nose was on full display after he took the pie to the face and I must admit I couldn't help but laugh at just how much more the pie seemed to accentuate that particular feature of his face.

Marchand pledged to make a small donation but his participation in the challenge was much more about bringing attention to this cause, something that has obviously been successful given that we are discussing it here today. Marchand would also go on to challenge Sophia Jurksztowicz, a reporter from NESN, to participate in the challenge as well and I am happy to say that Jurksztowicz was very quick to respond to being challenged by the Bruins pest.

Dorion: Pierre reports to me.
Subscibe to
Our NEWSLETTER
Receive the best articles of the web directly in your email