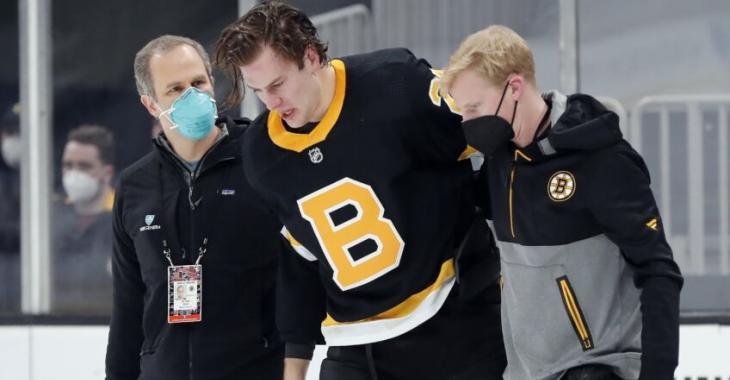 The Boston Bruins are fighting for their playoff lives as they head down the final stretch of the regular season and on Saturday they all but confirmed that they would be doing so without one of their top defensemen in the lineup.

The Bruins lost defenseman Brandon Carlo for basically the entire month of March when he suffered a concussion back on the 5th of that month, one that would leave him sidelined for several weeks. That's why the Bruins were thrilled last week when Carlo made his eventual return to the lineup, excellent timing with a Philadelphia Flyers team nipping at their heels for 4th place in this season's East Division. That excitement has quickly died down however as it now appears as though Carlo will once again be sidelined for the foreseeable future.

On Saturday morning the Bruins confirmed that Carlo would be out of the lineup for the next several weeks. The Bruins confirmed that Carlo suffered what has been described as a "upper body" injury and that the injury occurred during the first period of the Bruins' 4 - 1 loss to the Penguins on Friday, but provided no additional details at this time.

The Bruins are currently listing him as week to week which tends to signal a situation in which a player is going to be out for the long term, although with nothing more concrete in terms of timeline provided by the Bruins we are left to speculate on that at this time.

One has to wonder given the vague nature of this update if Carlo may not have come back too soon. Concussions are notoriously difficult to deal with given that we still have a very limited understanding of the human brain, and they become even more tricky to handle when you are involved in a contact sport like professional hockey. Carlo may very well have been fine while working out and training on the sidelines, but returning to game situations may have been a different matter or could have even put him in a situation to exacerbate the problem.

Dubois shakes off trade rumours, signs a short-term deal with Blue Jackets
Subscibe to
Our NEWSLETTER
Receive the best articles of the web directly in your email