This cannot be true! 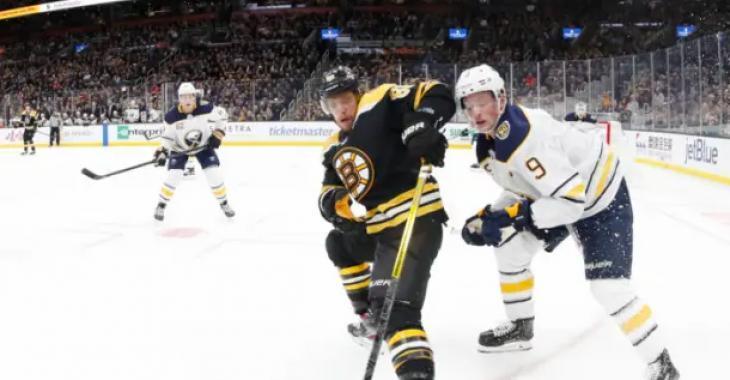 The trade market is beginning to look wild in the National Hockey League at the moment and things went up a level when Jimmy Murphy of Boston Hockey Now reported a trade scenario that shocked Bruins fans.

It has been reported that the Buffalo Sabres are taking calls on captain Jack Eichel and seeking a king’s ransom for the forward as a league executive told Murphy that the Sabres could demand up to six components in the return for the 24-year-old center.

When discussing the Sabres’ approach to moving Eichel, Murphy revealed that “the only untouchables on the Boston Bruins roster right now are Patrice Bergeron, Brad Marchand, and Charlie McAvoy.” As you quickly realize, David Pastrnak’s name does not make the list, which got Murphy going even more. He goes on to explain how Pastrnak may be the only way the Bruins can acquire Eichel.

This is how he breaks it down:

“Pastrnak is entering his penultimate season on a team-friendly contract that carries a $6.6 million cap hit. Surely if he continues to be a 30-40 goal scorer and challenge for 80-100 points a season, Pastrnak, who will be 27 when his contract expires, is in line for a big pay raise. So, let’s just say Pastrnak’s new cap hit will be a minimum of $9 million per season. While David Krejci and the Boston Bruins share a mutual interest in bringing Krejci back for next season, what about beyond next season? Also, what will the Bruins need to pay to extend Bergeron, who is entering the last season of a contract that carries a $6.8 million cap hit? What about Charlie Coyle? Are the Bruins thinking of moving him to the wing?

Needless to say, there could be a giant void down the middle for the Boston Bruins in as early as 2022-23.”

This will surely get Bruins’ fans going as we all know that Pasta is beloved in Bean Town and was the Bruins’ top forward behind Marchand and captain Bergeron.

The idea of breaking up the Perfection line sounds more than imperfect.

The Bruins already have a lot of questions to ask themselves this offseason, one of them being what to do with Taylor Hall, we cannot imagine them thinking about moving one of their best forward for Eichel, who’s under contract through 2025-26 with a $10-million cap hit and played his last game of the campaign for the league-worst Sabres on March 7 before being ruled out for the remainder due to his neck injury.

What do you make of crazy Jimmy Murphy’s trade scenario?

Penguins had a 3-on-0 in overtime and didn’t get a shot on net!

Tom Wilson punches Buchnevich while he’s down, Panarin comes into to defend him and gets bodyslammed
Subscibe to
Our NEWSLETTER
Receive the best articles of the web directly in your email