Bruce could be back! 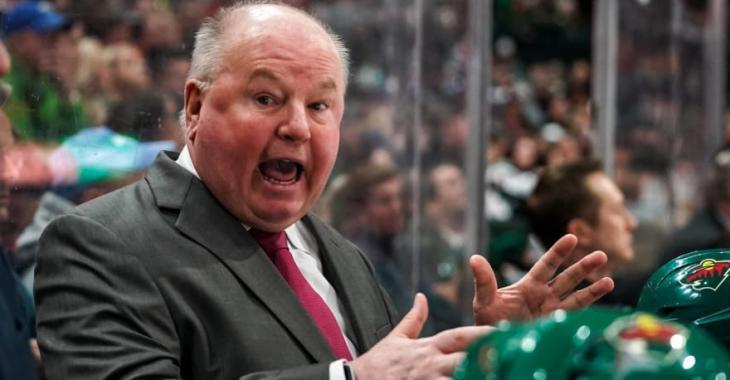 The Buffalo Sabres are one of the teams searching for a head coach and it sounds like Bruce Boudreau is amongst the candidates.

According to Pierre LeBrun, Boudreau, along with former Arizona Coyotes’ bench boss Rick Tocchet are among several candidates the Sabres have lined up for interviews in their head coaching search. Tocchet is also being considered by the New York Rangers.

However, it is reported that Sabres general manager Kevyn Adams is in no rush to make his decision and wants to talk to quite a few coaches. Interim head coach Don Granato remains in the mix to remain at the helm of the team. Boudreau is believed to be a top contender, thanks to his impressive record in the NHL.

This was a tough season for the Sabres and this is no doubt the team would greatly benefit from a coach like Boudreau, who has ton of experience. Buffalo finished with 37 points (15-34-7) in 56 games and missed the playoffs for the 10th season in a row. There was a sense of improvement within the club when Ralph Krueger was fired in March as Granato led the team to a 9-16-3 record in his first action behind an NHL bench.

As for Boudreau, he was fired by the Minnesota Wild back in February 2020, and had been waiting to get a new job. In the meantime, he has brought a USPHL team to Hershey. He purchased a junior hockey team in the United States Premier Hockey League’s (USPHL) Premier Division that was scheduled to play in Hershey, Pennsylvania, at historic Hersheypark Arena beginning in the 2021-22 season. The Hershey-based USPHL club will be a Tier III Junior A team in the league’s Premier Division. Players’ ages range from 17-to-20 years old. On top of that, Boudreau was a contributing expert to NBC Sports Washington’s coverage of the Capitals for the upcoming season. Boudreau coached 329 games for the Caps, leading them to a 201-88-40 record.

Reports have also mentioned that Boudreau was considered to become the first head coach of the Seattle Kraken, set to join the league in 2021-22.

A lot of fun rumours for the beloved Bruce!