Stunning visuals from the site of today's game. 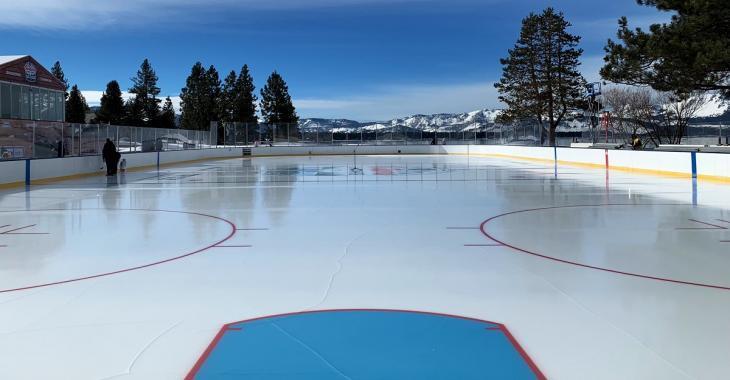 Hockey fans are in for a real treat on Saturday and although we all knew that the view from Lake Tahoe was going to be a good one, I must admit that I did not anticipate things would look this beautiful.

Although some fans have mistakenly been led to believe that the games will be played on the lake itself but considering the fact that Lake Tahoe doesn't freeze, that will not be the case. Instead the National Hockey League has constructed a rink on the 18th hole of a local golf course, one that is right beside Lake Tahoe itself, and one that provides a breathtaking view of the Sierra Nevada Mountains in the background. I think you would be hard pressed to argue that there is a perfect setting in which to hold an outdoor hockey game, but I have no doubt that the NHL is going to try to outdo itself in the near future.

So let's take a look at some of the amazing photographs that have already made their way online.

National Hockey League columnist Nick Cotsonika has done an incredible job of capturing some truly awe inspiring images from the rink already, having had the benefit of being on hand on Friday while both the Las Vegas Golden Knights and the Colorado Avalanche took to the outdoor rink for their regular practice, and here are just a few of my favorites.

First up from our cover photo for this article, an incredible rink level view of what the players will be seeing.

Here's one of Golden Knights star Marc Andre Fleury with the aforementioned Sierra Nevada Mountains and Lake Tahoe in the background.

Here's another similar picture from when the Avs took the ice, this time giving you a much better view of the lake and mountains.

A wide shot that shows you that the rink is well and truly surrounded by Lake Tahoe, and if you look closely you can even spot a rainbow.

Dimitri Filipovic of Elite Prospects also shared some shots of the scene at Lake Tahoe, showing you a different perspective on some of the angles shared above.

Last but certainly not least, a shot that might reflect what we will be seeing later today when the players finally hit the ice. One that also includes a breathtaking skyline.