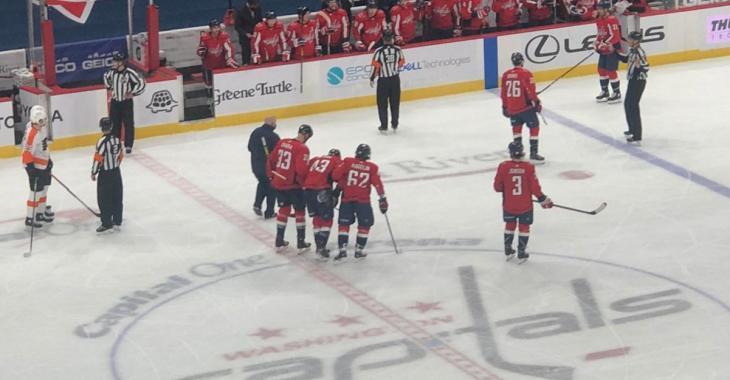 Washington Capitals enforcer Tom Wilson has dominated the headlines all week and once again he will find himself in those headlines for all the wrong reasons.

On Saturday night Wilson and the Capitals faced off against the Philadelphia Flyers and Wilson was injured early on when he was on the wrong end of a knee on knee collision. The hit, if you can call it that, was delivered by Flyers forward Nicolas Aube-Kubel and it has left Wilson in serious pain, so much so that he had to be carried off the ice by his fellow teammates.

We have no other information to share with you at this time regarding the hit, but I strongly suspect that Wilson will not be returning to tonight's game and in fact he may be out for some time as a result of this hit.

Update: In spite of being carried off the ice and in spite of his knee appearing to bend the wrong way on the play, Tom Wilson has already returned to the game. Love him or hate him, I have to give him credit from coming back so quickly from a hit that looked this bad.