“His recent statements... are a stain on his legacy.” 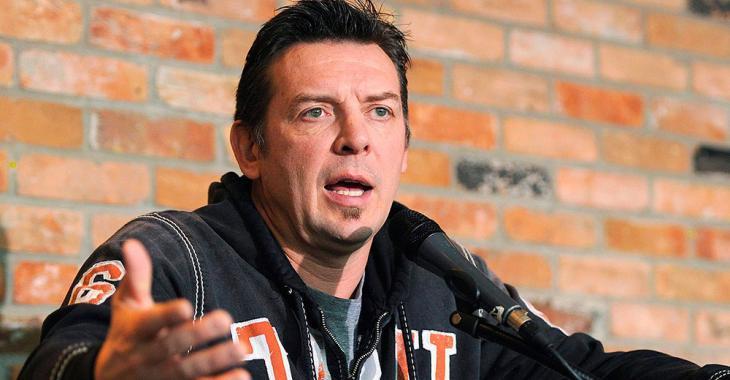 Former NHL superstar Theo Fleury has made a bit of a second career for himself post-playing days a charismatic, outspoken online social media warrior. Scroll Fleury's Twitter account and you'll be treated to Justin Trudeau hatred, COVID-19 misinformation and just general tinfoil hat style conspiracy theories. I should actually give Fleury a little more credit because it's clear that he's trying to expose the truth behind political corruption and expose our corrupted elected officials, but sometimes he goes a little too far off the deep end. Such was the case yesterday.

Fleury posted and then quickly deleted a post in which he claims that pedophiles and child predators will be able to easier track potential victims due to vaccine passport mandates.

How would pedophiles know where your kids are? What am I missing here? It seems to me that Theo is conflating two separate issues? And I'm not saying that i'm for or against vaccine passports... I'm just trying to sort out what it is Fleury is saying here?

In any case, when commenters pushed back on Fleury and asked him for clarification and sources, he simply Tweeted out an image of all his accomplishments, including an honorary doctorate degree from his hometown Brandon University in Brandon, Manitoba. As you might imagine, Brandon University isn't too happy to be lumped into an online conversation about COVID-19 vaccines and child predators. As a result the University issued a statement today on their official website condemning Fleury for spreading misinformation. The University did not, however, strip Fleury of his honorary degree.

Here's the statement in full:

Brandon University is steadfast in our support of academic freedom, academic inquiry, and of robust public debate around issues of consequence. These freedoms, however, must be balanced against responsibilities like honesty, like integrity, and like good faith. We are disappointed that honorary degree recipient Theo Fleury is, increasingly, not meeting that balance.

In 2015, Brandon University presented Fleury with an honorary doctorate, recognizing his significant contributions to combating child sexual abuse, and for his efforts, at that time, to promote healing and recovery. Fleury, a survivor of sexual abuse in his youth, was one of the key voices exposing sexual predation in junior hockey, and he continues to deserve both praise and understanding for that role.

More recently, Fleury has turned his voice to launching personal and political attacks and to the espousing of conspiracy theories. Over the weekend, he shared a reprehensible statement falsely linking vaccine passports to pedophilia, and he responded to criticism by brandishing a screenshot highlighting several of his past awards, including his honorary degree from BU.

Honorary degrees are awarded by Brandon University to recognize an individual’s significant achievements or contributions; they are not an academic credential.

Fleury’s significant contributions to exposing the rot in junior hockey, and to supporting other survivors of child sexual abuse through recovery, continue to deserve respect. It is understandable that he may struggle to trust authority, and that he may see dark motives in others’ actions. His recent statements, however, go beyond reasonable distrust and are a stain on his legacy, which saddens us.

One of the tragedies of abuse is how it perpetuates itself across generations. We call on Fleury to recognize that he is now a person in a position of authority, and to recognize that his actions as an authority put him in a place where he can cause harm to others. We hope he takes advantage of the resources at his disposal and seeks greater understanding of the science behind the pandemic and the essential public health role of vaccines.

I have to say... that was an incredibly well crafted statement.

The University shows both empathy for and yet disappointment in Fleury for the way in which he has chosen to use his authority. I also think it's a smart move to not strip him of his degree, because doing so would only give him more ammunition in his seemingly endless battle against authority.

Canadian icons Wayne Gretzky and Steve Nash have just bought their own sports team.
Subscibe to
Our NEWSLETTER
Receive the best articles of the web directly in your email