NHL News : Brandon Prust to a female hockey fan: “I hope they force you into the sex trade” 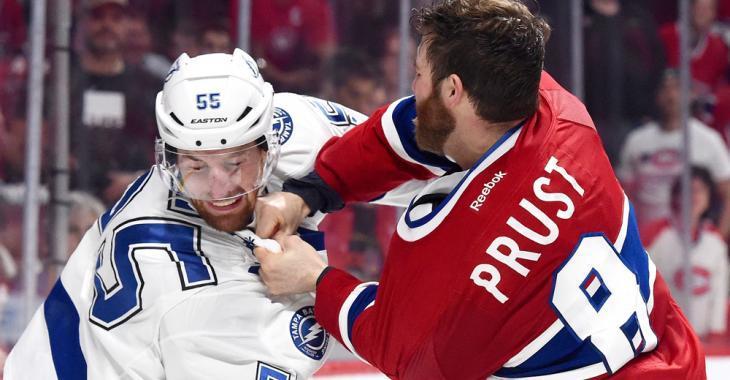 Former NHL enforcer Brandon Prust has been making headlines since his NHL retirement a few years ago and never for the right reasons, it seems.

Prust, who played parts of nine NHL seasons with the Calgary Flames, Arizona Coyotes, New York Rangers, Montreal Canadiens and Vancouver Canucks, has been an outspoken critic of Canadian prime minister Justin Trudeau and has shared many controversial opinions on COVID-19 via his Twitter profile.

Yesterday though, in a rant about COVID-19 vaccine mandates, Prust told one woman whom he disagreed with that he hopes "they force you into the sex trade."

“I’m going to be on the road tomorrow driving. If I see anyone else on the road I will lose it,” wrote Prust on Twitter in a veiled post.“Also everyone take their vitamins tomorrow because mine won’t work if you don’t take urs (yours).”

A woman replied sarcastically – “Thanks in advance for driving safe” – that's when Prust went off the deep end, comparing vaccine mandates to forced prostitution in his reply.

“So that means they can force me to do anything they want? I hope they force you into the sex trade so you can finally get laid you sheep,” he wrote. “I paid more taxes for these roads than you could ever dream of money in your account.”

The comment drew a torrent of criticism. One man called it “disgusting and completely disrespectful” while another called it “a childish, horrific response.”

After the woman deleted her initial reply, Prust wrote on social media that his comment “was blown out of context,” adding: “As usual people are just blowing s–t out of context. Anyway have a good day everyone lol (laugh out loud).”

Prust then returned to social media a few minutes later – more than 12 hours after the initial sex-trade tweet – noting he “would like to apologize to the lady I replied to” on Twitter.

“I apologize for my bad choice of words,” he wrote. “I don’t hope the government forces anyone into the sex trade!”

I think someone should take Prusty's phone away from him for a bit. I'm all for free speech, but this guy isn't exactly the bastion of free thinking that he may think he is.

Report: Update on Carey Price to Kraken situation
Subscibe to
Our NEWSLETTER
Receive the best articles of the web directly in your email