NHL News : Brandon Carlo gets rocked by Cal Clutterbuck, has trouble standing up

This is ugly stuff. The guy is beyond woozy. 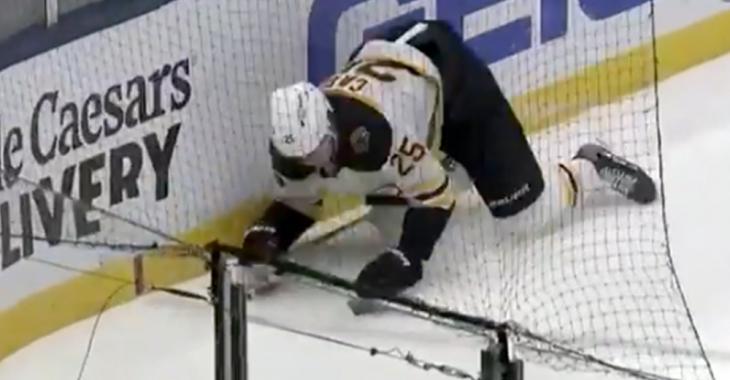 Midway through the 3rd period in Game 3 of a closely played series between the Boston Bruins and New York Islanders and we have another ugly situation playing out in the Stanley Cup Playoffs.

While chasing down a puck in his own zone Bruins defender Brandon Carlo takes a stiff hit from Islanders forward Cal Clutterbuck. Carlo's head clearly makes contact with the glass and he goes down hard. He stays down, gets up to his knees but... man, oh man does he look like he's on a different planet.

The 24 year old defenceman has missed significant time in his young career due to concussion and post-concussion issues. You obviously never want to see a guy in a situation like this, but you definitely don't want to see it happen to a guy with a long history of head injuries. In fact, he missed an entire playoff run due to a concussion. To say that the kid has been through the ringer is putting things lightly. In 27 regular season games with the team this season, the 6 foot, 5 inch, 230 pound native of Colorado Springs, Colorado has three goals and four assists. He's gone pointless with four penalty minutes in seven playoff games this postseason.

As you might expect Carlo left the game and will not return to action. Frankly, I'd be surprised if he's cleared to play Game 4 on Saturday evening. As for Clutterbuck, he's obviously no stranger to big hits and is consistently one of of the NHL's leading hitters year after year. He's been known to throw a dirty hit or to hang a leg every now and again, but I don't see this hit as anything malicious. Clutterbuck obviously throws a hard hit, but it's with the intent to separate Carlo from the play, not with the intent to injure. Try as I might, I can't find anything wrong with this hit.

We'll have to wait for the post-game comments from head coach Bruce Cassidy until we know the severity of Carlo's injury. Here's hoping for the best.