Storms off the ice like Matthew! The Tkachuk boys just getting rag dolled this week. 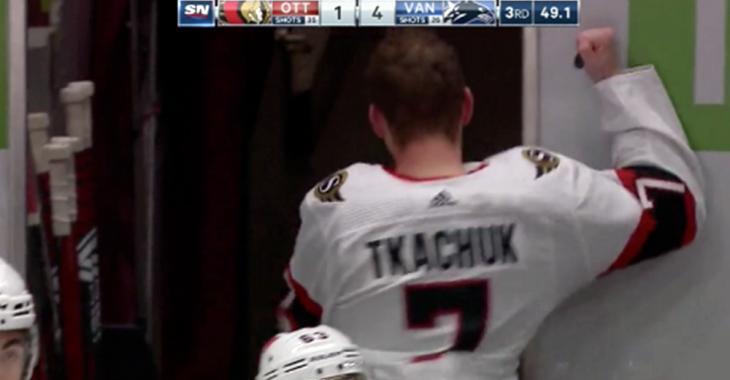 It's been a week to forget for the Tkachuk boys.

After making a bit of a fool of himself in his team's loss to the Toronto Maple Leafs earlier this week, Calgary Flames forward Matthew Tkachuk got himself one punch dropped by Montreal Canadiens defenceman Ben Chiarot earlier this evening in the Flames' 4-2 loss. Of course, the real scene was following Tuesday's loss to the Leafs wherein Tkachuk absolutely SNAPPED and went after Leafs defenceman Jake Muzzin who had annoyingly flipped a puck toward Tkachuk following the final buzzer. Tkachuk then preceded to let all Hell loose and ended up storming down the tunnel and to the Flames' dressing room.

Well... lil' bro Brady must have been watching the tape and taking notes because this evening he did his best Matthew impression. With time ticking down in a 4-1 loss to the Vancouver Canucks, Ottawa Senators forward Brady Tkachuk got into it with Zack MacEwen directly in front of the bench. The pair actually put on a pretty good tilt, but Tkachuk must have gotten a chirp from Canucks forward Jay Beagle as it appeared the two had words for each other. In the end though, Brady ended up storming down the tunnel much like his brother did just days earlier.

Look... I love both the Tkachuk boys and the way they play. Just... keep it between the whistles boys. Enough of this off-ice nonsense. Whatever happened to, "Don't let them see you sweat!" There's something to be said for not letting your opponent know that they can get under your skin.