A point of huge concern for the Canucks. 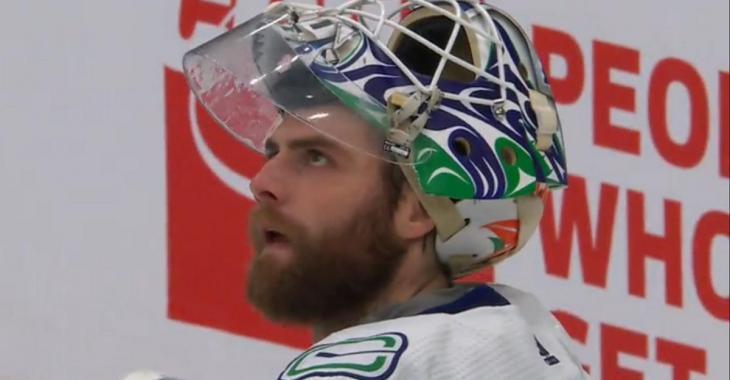 The Vancouver Canucks suffered another embarrassing loss on Saturday night, this time falling to the Toronto Maple Leafs by a score of 5 - 1 in a game that was never truly close.

The first period hadn't even ended before fans in Vancouver had managed to get the #FireBenning hashtag trending on social media, a hashtag that has popped up more and more as of late following a catastrophic offseason for the Canucks organization.

The biggest cause for concern however came during the opening moments of the third period when a lazy backcheck from Canucks forward J.T. Miller resulted in a wide open Auston Matthews and yet another Toronto Maple Leafs goal. The goal itself or even the ugly effort from Miller were not the main cause of concern however, instead it was the body language of goaltender Braden Holtby who looked disgusted with his team on the ice.

Holtby looks depressed on his knees after the goal goes in, and as if that wasn't enough the look on his face says it all.

Holtby could be seen talking with Miller later during the third and although following the game he refused to tell reporters what was exchanged on the ice, I think it is safe to assume that the conversation was not a pleasant one. It was Holtby's post game comments that drew the attention of NHL insider Elliotte Friedman however, Friedman who has covered the goaltender for many years in Washington stated that he had never before seen Holtby speak about the team in front of him in such a negative fashion.

"I could be totally wrong about this but... from all those series covering Braden Holtby in Washington, I heard a lot of times that he would be asked about the play in front of him and he would just look at us and say 'Look, it's not my job to worry about that. It's my job to stop the puck,' and I got used to Braden Holtby saying that, I understood what he meant," said Friedman on Saturday.

"The fact that he kind of says 'we're out of sync' says to me that he thinks it's a big problem in front of him. If I'm wrong about this I'm sure Holtby will let me know about it at some point, but the answer he gave tonight is different from the answer I heard a lot in Washington and to me, that is telling" said Friedman in conclusion.

If Friedman is correct then Holtby is very unhappy with how things are unfolding in Vancouver, and given the start to the season for the Canucks he's definitely not alone.