And he calls out Ovechkin’s wife too! 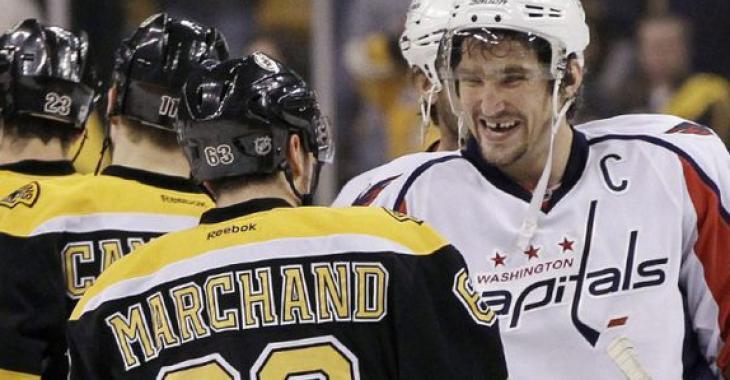 Earlier this week, it was announced that the Washington Capitals have lost four key players including Alexander Ovechkin after National Hockey League served a wake-up call and fined the Caps $100,000 for violating the COVID-19 safety protocols.

The violation was regarding “social interactions among team members who were in close contact and who were not wearing face coverings.” It was revealed that Ovechkin, Dmitry Orlov, Evgeny Kuznetsov and Ilya Samsonov were grouping together in a hotel room without face masks.

Rival Brad Marchand of the Boston Bruins can’t believe these players dared to break protocols. As the gritty forward explained on Friday to Jimmy Murphy of Boston Hockey Now, “there is no reason any NHL player can’t adhere to the NHL COVID Protocol that not just the NHL but also the NHLPA approved prior to this season. The rules are in place for a reason and whether or not a player agrees with them or not, it’s about respecting your teammates, your team, and the league.”

That’s why Marchand does not feel sorry for Ovi, Orlov, Kuznetsov and Samsonov, who are expected to miss at least four games, including tonight’s home opener in Washington.

“I think the big thing is, it’s more of a respect thing,” Marchand said. “We all want to be able to play, and there’s rules put in place for a reason. They’re not that hard to follow. We all know the consequences of breaking the rules, and we know what the rules are. So they brought that on themselves. We’ve all been told very heavily what we’re allowed to do and what we’re not allowed to do, so it is what it is on their side of things.”

Marchand couldn’t believe Ovechkin’s wife got mixed up into this, calling out the NHL for treating Russian players differently. The Bruins forward found it absurd and comical.

“I think it just comes down to having respect for one another,” Marchand said again. “You can easily hurt your team by breaking the rules and potentially getting it and having to quarantine. It’s pretty simple to follow the rules. If you get it by chance, it is what it is. It’s almost inevitable. But if you’re going to put yourself in a situation, that’s on you.”

Ovechkin did make a statement, regretting his actions, but his wife was not happy with the decision… We won’t go back there.

“I regret my choice to spend time together with my teammates in our hotel room and away from the locker room areas,” Ovechkin said in a statement. “I will learn from this experience.”

Report: Micheal Ferland's NHL career appears to be over
Subscibe to
Our NEWSLETTER
Receive the best articles of the web directly in your email