This guy is an absolute stud and the Blues are going to kick themselves for years. 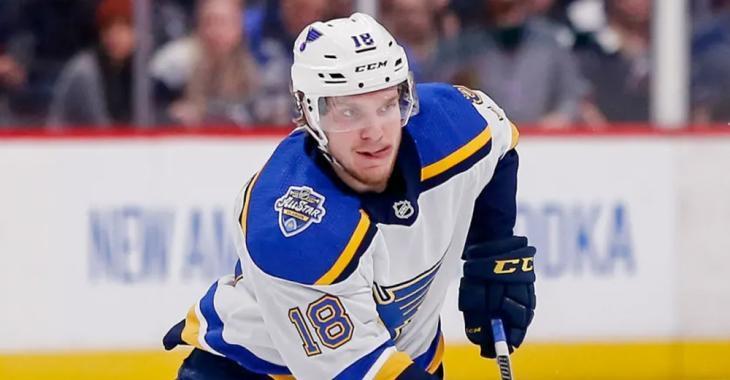 This just in, the St. Louis Blues have re-signed restricted free agent forward Zach Sanford to a one year contract worth $2 million.

The 26-year-old forward dressed in 52 regular-season games, posting 16 points (10 goals, six assists) and 25 penalty minutes. With Sanford, Jordan Kyrou, Ivan Barbashev and the recently acquired Pavel Buchnevich now all under contract, Blues GM Doug Armstrong will turn his attention toward RFA Robert Thomas. There's just one problem... Armstrong and the Blues have less than $2 million to sign Thomas, who looks like a breakout star candidate.

The Blues have just $1.5 million in cap space according to CapFriendly.com and to be perfectly frank that just won't be enough to lock up Thomas. Sure Thomas had a bit of a dip in production this past season, but his 10 goals and 42 points in 66 games during the 2019-20 season points to a player with untapped offensive potential. He's just 22 years old, a former 1st round pick (20th overall in 2017) and he has the versatility to play anywhere in the Blues' lineup. They'd be wise to lock him up long term and watch him turn into a 50+ point player... Hell he could even end up being a 60+ or 70+ point player by the time he's next up for contract renewal.

Fans online reacted very negatively to Sanford's new deal, claiming that by giving Sanford $2 million the Blues have essentially squeezed out Thomas from the lineup due to salary cap constraints.

Check out some of these replies to the news of Sanford's signing:

The sticking point, of course, is Vladimir Tarasenko and his monster $7.5 million contract. If Armstrong and the Blues can manage to rid themselves of Tarasenko and his onerous cap hit, they'll have more than enough money to sign Thomas long-term and potentially bring in some more firepower via free agency. In fact, I'd argue that Thomas is the perfect replacement for Tarasenko in the team's lineup and he'll come at a much more reasonable cap hit. Stay tuned, there's a giant $7.5 million shoe to drop before the offseason is over for the Blues.

NHL announces changes to schedule: 36 games and 15 teams affected!
Subscibe to
Our NEWSLETTER
Receive the best articles of the web directly in your email