Will he stay or will he go? 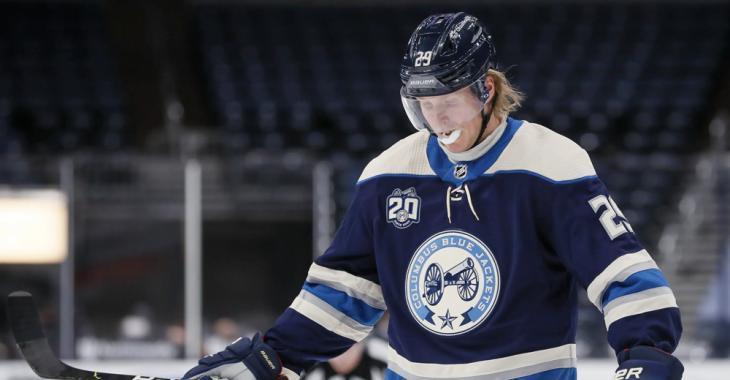 It hasn't exactly been a match made in heaven between Finnish sniper Patrik Laine and the Columbus Blue Jackets.

Laine, of course, was traded to the Blue Jackets from the Winnipeg Jets midseasonalong with Jack Roslovic in exchange for Pierre-Luc Dubois. While Dubois hasn't exactly lit the world on fire either, a lot more was expected from Laine when he first arrived in Columbus. He managed just 10 goals and 21 points in 45 games with his new club and clashed with head coach John Tortorella early and often.

Tortorella is obviously out of the picture now, but there's talk that Laine, who is a pending restricted free agent, could also be out of the picture in Columbus, as well. The Blue Jackets are expected to undergo a bit of a rebuild over the next few seasons and frankly it would be surprising if Laine decides to stick around to see things through. Star defenseman Seth Jones has reportedly already requested a trade this offseason and it wouldn't be surprising to see Laine do the same.

Still, newly appointed Blue Jackets head coach Brad Larsen has a plan for Laine and it doesn't appear that he believes Laine will be traded. In his latest appearance on Columbus' QFM96 radio, Larsen said about Laine:

"We are going to surround him with the best players possible...we are not going to make him something he's not"

Yet at the saame time, in his latest 31 Thoughts column NHL insider Elliotte Friedman wonders if the surging Florida Panthers would be a good fit for Laine this offseason. After all, he has a relationship with Panthers captain Aleksander Barkov (A fellow Finn) and the Panthers have both the trade assets and the cap space to absorb Laine this offseason.

I’m curious to see if Florida asks about Patrik Laine. He and Aleksander Barkov have a good relationship. The Panthers are expected to be aggressive in pursuit of improvement.

I think Laine would be a perfect compliment alongside Barkov who has been playing mostly with players like Carter Verhaeghe and Mason Marchment. No offense to those players, but they simply don't have the skill set that Laine possesses. Imagine the Panthers rolling out a line of Barkov, Laine and Jonathan Huberdeau... that honestly might be one of the most offensively potent lines in the entire NHL. Fill out the rest of the scoring lines with players like Sam Bennett, Anthony Duclair, Alex Wennberg, Verhaeghe and youngster Owen Tippett and you have the beginnings of a very deep offensive squad.

Camera catches Tanev brutally mocking Kuhlman with f-bombs and tough insults!
Subscibe to
Our NEWSLETTER
Receive the best articles of the web directly in your email