NHL News : Blackhawks get in touch with Corey Crawford

The Devils’ goalie shocked everyone by retiring unexpectedly at the start of the season. 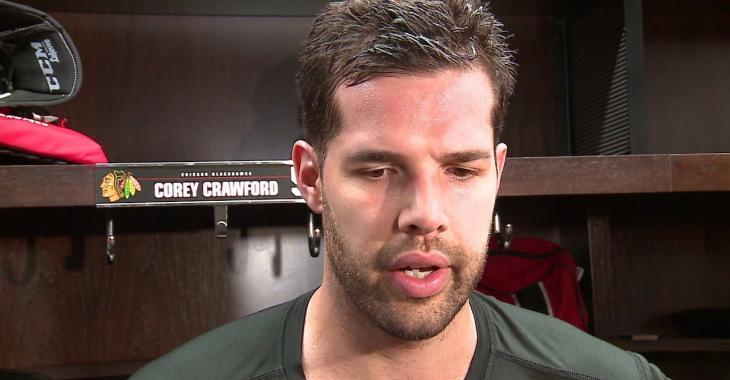 A few days before the start of the 2021 NHL season and his debut with the New Jersey Devils, goaltender Corey Crawford announced his retirement from hockey. This came as a huge shock and just hours after the Devils had announced that Crawford would be stepping away from their team for an “indefinite leave of absence.”At the time most people thought nothing of it, assuming that something had taken place in Crawford’s personal life that forced him away from the ice for a period of time. We were wrong and he was gone.

We don’t know what pushed him to hang up the pads and what will come next in his future.

That could be why Chicago Blackhawks general manager Stan Bowman got in touch with him earlier this week. He too wants to know.

Crawford will go down in history as one of the greatest goaltenders in Hawks’ history. He ranks third all-time in games played and wins by a Blackhawks goaltender behind Hall of Famers Glenn Hall and Tony Esposito. He’s been in the Blackhawks organization since being drafted by the team in the 2nd round (52nd overall) in the 2003 NHL Entry Draft. He’s been more or less the team’s uncontested starting goaltender since 2010-11 and it’s only due to injuries that he’s been limited in recent years. He posted a record of a .917 save percentage and 2.77 GAA in 40 games last season with the Blackhawks. He had a .907 save percentage and 3.31 GAA in the playoffs as Chicago was eliminated in the first round by the Vegas Golden Knights in five games. Crawford was selected in the second round, 52nd overall, by Chicago at the 2003 NHL Draft. He’s a two time Stanley Cup champion (2013 and 2015) and he’s also a two time Jennings Trophy winner (2013 and 2015). To be perfectly honest, he’s one of the most underrated players in Blackhawks history.

Bowman revealed to the Chicago Sun Times that he “exchanged some texts with Crawford when he  unexpectedly retired  on Jan. 9, wishing the longtime Hawks goaltender well.”

That’s all the GM would reveal. When asked if the organization would bring Crow back back for any retirement honors, the Hawks has not talked about it. Yet.

“Not saying it won’t happen, but that’s not really our focus right now,” Bowman said.

We certainly hope it will. We also hoped to get more news about Crawford and are hoping he is doing well after this surprising turn of events in his career.

Multiple NHL teams announce attendance limits for 2021 including Wild, Stars and Coyotes
Subscibe to
Our NEWSLETTER
Receive the best articles of the web directly in your email