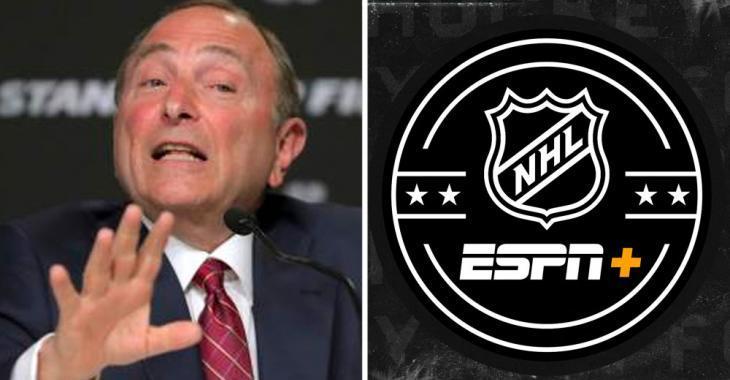 In case you missed it last night, ESPN returned to the NHL for the first time in 17 years broadcasting the 2021-22 season openers in back to back games. Personally, as someone who didn't watch ESPN broadcasts often back in the day (Canadian here), I was absolutely blown away. To be perfectly frank, broadcasts on NBC always felt and sounded like a cut below those done by CBC, Sportsnet and TSN up north in Canada, but ESPN... ESPN is legit.

The play by play by Sean McDonough and John Buccigross was stellar and I'm always a fan of Ray Ferraro's and Brian Boucher's analysis. Again, if this is what I can expect from ESPN all season long, consider me a fan.

But evidently, there's someone who's not such a big fan of ESPN and that's NHL commissioner Gary Bettman.

During an interview with Sports Business Journal, Bettman appeared to throw ESPN under the bus a bit, criticizing the network for not promoting the game enough when they weren't rights holders.

"With my tongue in my cheek, I've said a number of times that if ESPN is half as good at promoting us as they were at freezing us out when they didn't have our rights, this is going to be great," Bettman said.

While I admitted that maybe I'm not the biggest ESPN watcher, I understand that ESPN is an absolute titan of the industry. The fact of the matter is that the NHL needs ESPN more than ESPN needs the NHL. The past 17 years is a perfect illustration of that and, frankly, last night's successful re-debut of the league on the "Worldwide Leader in Sports" should tell you everything you need to know.

I understand that Bettman has done a lot of good for the NHL, especially from the perspective of team owners and investors, but personally I'd just like him to fade into the background a little more. The boys are back on the ice, there's no labor negotiations coming up and he just landed a giant deal with ESPN. Could we just go a little while without having to see or hear from Bettman? Is it just me?

Report: Leafs and Andersen re-engage in contract negotiations
Subscibe to
Our NEWSLETTER
Receive the best articles of the web directly in your email