The commissioner is clearly very proud of his league's status compared to the NBA, NFL and MLB. 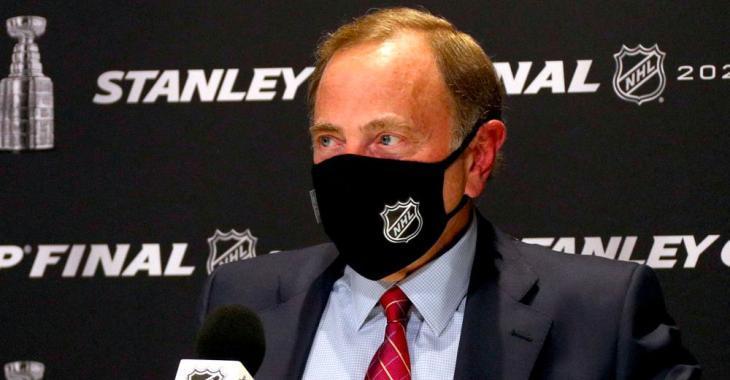 According to NHL commissioner Gary Bettman himself, there are just four players left in the league who have either not yet received their COVID-19 vaccination or who have refused the vaccine entirely.

"Our vaccination rate is incredible," Commissioner Bettman said prior to the season opener between the Tampa Bay Lightning and Pittsburgh Penguins yesterday evening. "Four players, not four percent of players. All of our officials are vaccinated. All of the personnel that come into contact with the players are vaccinated."

Compared to the NBA, NFL and NBA, the NHL has far more of its league fully vaccinated against COVID-19. It's believed that the only four players left unvaccinated are Detroit Red Wings forward Tyler Bertuzzi, Edmonton Oilers forward Josh Archibald and Columbus Blue Jackets forward Zac Rinaldo. New Jersey Devils netminder MacKenzie Blackwood was unvaccinated, but ultimately made the decision to receive his shot so that he wouldn't miss any of his team's games.

"Throughout all of this, we had great collaboration and cooperation with the players and Players' Association," Commissioner Bettman said. "This doesn't happen to get to this point without that collaboration and cooperation. Yes, the players have stepped up to get vaccinated, but even thinking about how the players had to function the last two years, to go into the bubble. I spent three weeks there, I get it, but there were some who had to spend eight weeks there. Having to adhere to the protocols last season so we could administer 330,000 tests to keep everybody healthy. The fact that we were in the bubble and I think we did 35,000 tests and didn't have one positive. Everybody banded together to do the right thing. Maybe that's why hockey is the ultimate team sport."

Regardless of vaccination status though, the NHL is still operating under pretty stringent protocols for the 2021-22 season because, as we've seen, being vaccinated is no guarantee that you won't catch the virus.

"We continue to reinforce the fact that everybody has to remain vigilant, particularly when we have teams traveling the way our teams typically do so we don't lose sight of this fact," Commissioner Bettman said. "It's something we take very seriously."

Rumor: Taylor Hall will make a trade easy for the Buffalo Sabres.