NHL News : Bettman fires back at Lehner, criticizes him for comments that went viral

Give your head a shake, Gary... 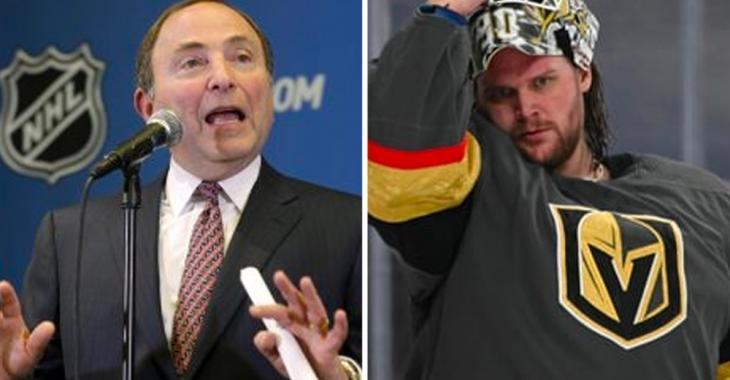 In case you missed it this past weekend, Vegas Golden Knights goaltender Robin Lehner went viral after he made claims that he and his teammates have been provided unprescribed benzodiazepines and sleeping pills by the NHL and that the practice has gone back for years.

Lehner went on a bit of an online rant, but this phrase in particular raised eyebrows:

Is it common for work places to give out benzodiazepines to employees when they travel and ambien ? Should that not be done by doctors or psychiatrist?

The NHL and the NHLPA reportedly reached out to Lehner to discuss these allegations and according to Lehner himself, those discussion were fruitful. In an impromptu press conference yesterday, Lehner shared some of the details from these discussions saying that he's encouraged by potential changes from the top of the league.

"I had a great talk with the NHL and the NHLPA over the last day. I'm excited for the potential change that can be made to protect the younger generation. This is something I've been advocating for for years, and I'm encouraged about the approach they want to take."

Interestingly enough, while Lehner's public comments were the impetus for change the goaltender says he'll keep his thoughts between him and league officials from here on out.

"But moving forward, I'm looking to help in a more private matter," said the outspoken netminder. "This weekend was a cry for help from this league, the league I love that has given me so much. But I'm just looking to protect the younger players. The only way to affect change, in my mind, is to do it in a non-public fashion."

Lehner has never been one to keep his opinions to himself and now suddenly that's the case? Call me a conspiracy nut, but I think it might have something to do with Gary Bettman's comments on the Sportsnet just 24 hours earlier. When asked about Lehner's allegations, here's what Bettman had to say:

"You don't have to tweet to get our attention. We have an 800 number people can call...we're an open book.”

An open book, Gary? Sure... an open book with pages ripped out and/or redacted...

The fact of the matter is that the only reason Lehner's concerns were taken seriously is because he went public with them. There's no way the NHL steps up to address things unless they're forced to, which is exactly the situation Lehner put the league in. Here's hoping that Lehner continues to share his thoughts and feelings because, to me, that's truly the way to affect the change that he's seeking.

Red Wings Gold Medal winner may be exposed at the expansion draft.
Subscibe to
Our NEWSLETTER
Receive the best articles of the web directly in your email