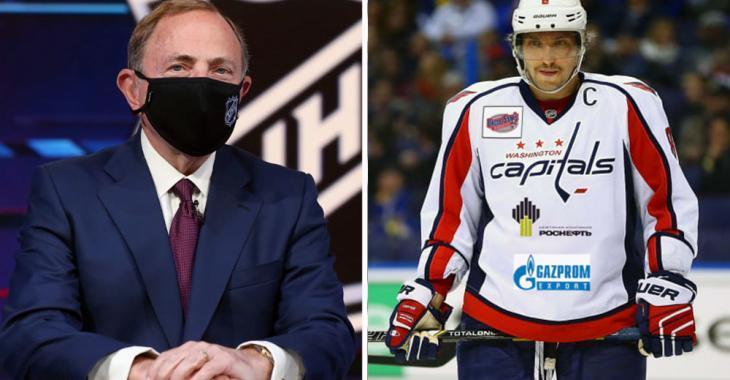 In case you missed it yesterday, NHL commissioner Gary Bettman met with the media for his annual "state of the union address" prior to Game 1 of the Stanley Cup Final and while Bettman mostly addressed questions about the league's officiating and about next season's schedule, he was asked specifically about the possibility of helmet and jersey ads for the 2021-22 season.

Bettman had good news and bad news, so to speak.

The Athletic's Sean Shapiro reported just last week that some NHL executives are excited to push jersey ads in the future.

“I would think that’s the logical next step,” one NHL executive confirmed to Shapiro last week.

The NHL and commissioner Gary Bettman had been resistant in the past when it came to selling advertisements on jerseys or player equipment. But the financial shortfall caused by the COVID-19 pandemic forced the league to get creative when it comes to revenue, opening the door to helmet ads this past season. Now, the league apparently has its sights set on jersey ads.

“I can’t wait to sell ads on the jerseys,” one team executive told Shapiro. “I’m not supposed to sound that excited about it, but it really is a huge opportunity for us as a sport to start trying to get back to some financial normalcy after 2020.”

Even worse is the thought of having ads placed on jerseys though, something that NHL commissioner Gary Bettman has historically been against but an idea that is now on the table given the tough financial circumstances the NHL finds itself in. Back in 2017 Bettman went on record saying, "It would take an unusual circumstance for us to even think about it," when asked about putting ads on jerseys. Well... I would argue that 2020-21 and the COVID-19 pandemic qualify as "unusual circumstances."

Key figure to return to the lineup for the Boston Bruins tonight vs. Caps
Subscibe to
Our NEWSLETTER
Receive the best articles of the web directly in your email