NHL News : Bergeron hints at retirement after this season 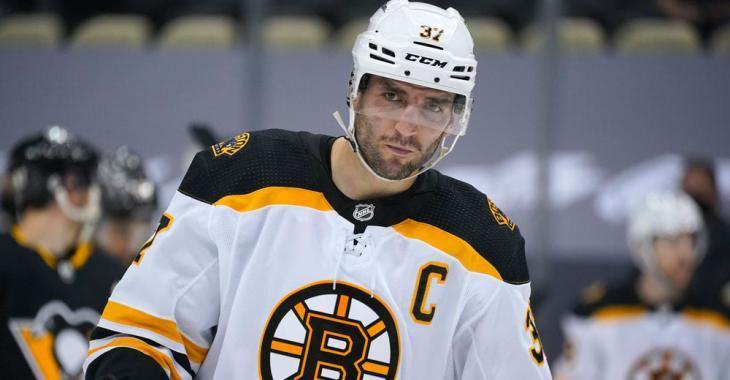 Boston Bruins captain Patrice Bergeron was asked yesterday about his future with the team and... well... Bruins fans might not want to hear this... but it sounds like Bergeron isn't exactly a lock to return in 2022-23. Bergeron's eight year, $55 million contract expires after this upcoming season, making him an unrestricted free agent for the first time in his career.

It's worth noting that Bergeron will be 37 years old next offseason and it's fair to say that he's earned the right to take his time on making any sort of decision. He's bled Bruins gold and black for 18 years and, frankly, he's one of those players that you can't imagine playing anywhere else. But when you see longtime Bruins like Zdeno Chara and David Krejci leaving the team, not to mention the "up in the air" future of Tuukka Rask, it makes you wonder about Bergeron's future with the team.

Suffice it to say that if Bergeron does elect to move on or to retire from the NHL, that his absence will be felt for years to come. Not only is he a two-way dynamo who contributes at both ends of the ice, he's the team's unquestioned leader. As Bergeron goes, so to do the Bruins and it's difficult to imagine this team without him in the lineup. He's a four time Selke Trophy winner as the NHL's best defensive forward and he's a consistent point per game player centering a line between stars Brad Marchand and David Pastrnak. With both Bergeron and Krejci out of the picture the Bruins would be looking at having 3rd liner Charlie Coyle as their top line pivot... not exactly ideal.

Bergeron put up 23 goals and 48 points in 54 games for the Bruins last season, at 35 years old. He's showing no real signs of slowing down, but there's no doubt that the NHL grind over the course of nearly 20 years is bound to take its toll. The fact of the matter is that no one would blame Bergeron if he were to make the decision to save his body and walk away from the game after this season.