NHL News : Bad news for Tyler Toffoli and the Habs.

Tough break for the Canadiens. 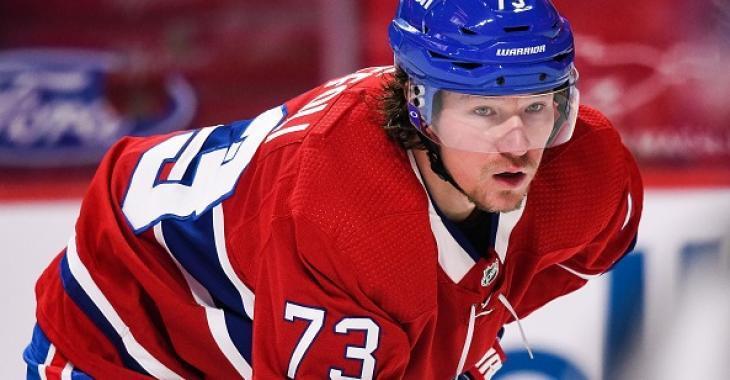 After a red hot start to the regular season the Montreal Canadiens have experienced something of a midseason collapse and they now find themselves in danger of missing the playoffs. Unfortunately for the Habs things have gone from bad to worse as they are set to face off against the Vancouver Canucks this evening, a team that is currently just a single point behind them in the standings, and will have to do so without one of their top offensive weapons.

On Saturday the Canadiens, via head coach Dominique Ducharme, confirmed that veteran forward Tyler Toffoli has been sidelined with an injury and will be unavailable as a result. Thus far we don't have many details regarding the nature of this injury, however the Habs themselves have reported it as a "lower body" injury and we also know that he is currently being listed as day to day by the team.

Toffoli has been nothing short of excellent in his first season as a member of the Montreal Canadiens, setting nearly a point per game pace while recording 18 goals and 9 assists for a combined 27 points in just 30 games played.

The timing could not be worse given that this will now give the Canucks a golden opportunity to leapfrog the Canadiens in the standings should they manage to pick up a win in regulation, although it must be noted that the Canucks have played 4 more games than the Canadiens this season which means even in the event of a loss the Canadiens still have some cushion to work with here.

As is often the case in the world of a contact sport like hockey there must be a "next man up" type of philosophy and tonight it will be veteran Habs forward Artturi Lehkonen who will step into the lineup to replace Toffoli. Lehkonen has made 21 appearances for the Habs this season but he has had significantly less offensive production with 2 goals and 2 assists for 4 points over that stretch.

The Canadiens also announced on Saturday that defenseman Victor Mete will be stepping into the lineup this evening to replace Xavier Ouellet and starting in goal for the Canadiens tonight will be Carey Price.

The worst is confirmed for Carey Price!