NHL News : Arizona Coyotes reportedly only have one player they're not willing to part ways with

The Arizona Coyotes are reportedly willing to listen to offers involving nearly every player on their roster. 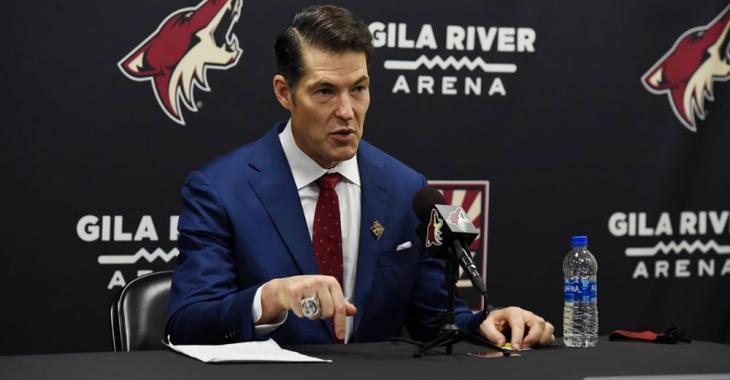 It's yet another period of transition for the Arizona Coyotes, which seems to be the one constant for the desert dogs that have dealt with uncertainty since their move from the snowy city of Winnipeg to the scorching heat of Arizona in 1996. As they continue to rebuild around their young players, they recently announced the hiring of veteran NHL assistant and junior coach Andre Tourigny as head coach, replacing the recently departing Rick Tocchet.

And according to Frank Seravalli, there's reportedly only one player on the roster that they're not willing to listen to offers from, and that would be none other than defenseman Jakob Chychrun.

Take a look at what he writes:

"Coyotes GM Bill Armstrong is trying to recoup draft picks and is willing to take on another contract or two with one-to-two years left on a player’s deal. He’s also willing to retain salary to help facilitate a trade – Phil Kessel and Darcy Kuemper appear to be candidates.

The Coyotes had a discussion with the Kraken about Oliver Ekman-Larsson, though I’m not sure much has materialized. Like Reinhart in Buffalo, Ekman-Larsson’s long-term future doesn’t seem to be in Arizona. Word has spread around the League over his exit interview, possibly the quickest in recent memory, and it certainly sounds like a move will eventually happen.

Another player expected to be on the move, though perhaps quicker than OEL, is pending restricted free agent Conor Garland.

Garland and the Coyotes haven’t discussed a contract since May, and the belief is Armstrong has focused on trying to move him rather than connect with Garland’s camp about a new deal. The Coyotes have options, as several teams have interest in Garland, including the Toronto Maple Leafs, Boston Bruins, New York Islanders, Vancouver Canucks, New Jersey Devils, Edmonton Oilers, Los Angeles Kings and Florida Panthers."

Armstrong has already swung two deals, trading young goaltender Adin Hill and a 2022 seventh-round pick to the San Jose Sharks for 23-year-old goalie Josef Korenar and a 2022 second-rounder. He also acquired veteran forward Andrew Ladd and three draft picks from the New York Islanders in exchange for absolutely nothing, likely as a favor for taking on the final two years of Ladd's deal.

Tom Dundon proves once again how cheap he is!

Rumor: Wayne Simmonds out long term.
Subscibe to
Our NEWSLETTER
Receive the best articles of the web directly in your email