NHL News : Anton Forsberg makes heartbreaking comments on getting waived so many times this season

Published on Wednesday, March 24 2021 by HockeyFeed in NHL News 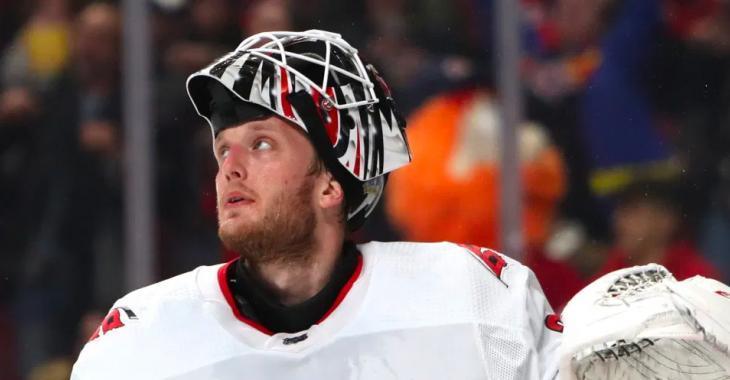 This season has been a roller-coaster ride for goalie Anton Forsberg. When he signed a one-year deal as a free agent with the Oilers, he expected to spend the season in Edmonton.

But the NHL had other plans… He was placed on waivers by the Oilers only to be claimed by the Carolina Hurricanes, Winnipeg Jets and Ottawa Senators this season.

He now gives the Senators goaltending depth with top netminder Matt Murray (upper body injury) sidelined and Marcus Hogberg (lower body injury) also out. However, this has been tough on the veteran goalie, who had this to say to Elliotte Friedman who shared his comments in his latest 31 Thoughts column on Sportsnet:

“(When I) picked Edmonton, I thought I was going to be there,” he said.

“I was pissed off that I got picked up by them (because) I signed with Edmonton for a reason. Then I met (Jets goalie coach) Wade Flaherty, and he was really good, too. He’s the one I spent the most time with, and I felt I got better every day, which really is nice. I understand why their goaltending is so good, because he does a really good job…. I told him I feel way better now than I did.”

“Lots of travelling, lots of practices and lots of quarantine, I guess.”

This has to be tough on Forsberg, who hasn’t played a game in the NHL this season. He has a career record of 12-25-4 with a 3.22 goals-against average and .901 save percentage.

However, he got some funny lines from close friends to keep things light.

“They ask if I’m going to check off all 31 teams in the league,” he laughed.