NHL News : Alex Galchenyuk attempts to save his NHL career! 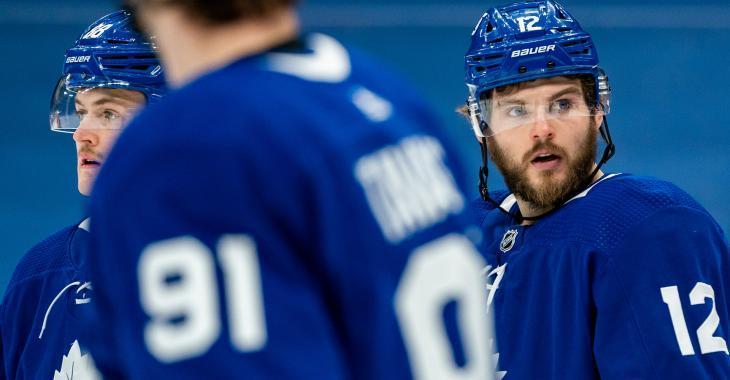 Forward Alex Galchenyuk is working damn hard to save his NHL career and prove to the Toronto Maple Leafs they were right to trade for him.

The veteran managed to convince head coach Sheldon Keefe to give him a real shot to crack the roster and collected three assists in five games with the Maple Leafs so far in the past weeks. Although he has average around 12 minutes and 41 seconds per game, Galchenyuk has gained the confidence of his coach and has played with John Tavares and William Nylander on top lines.

On Saturday night, Galchenyuk and star player Auston Matthews were integral parts of the rallying 4-3 overtime victory over the Edmonton Oilers.

Matthews did not mince his words when praising his new teammate.

“He plays with a lot of energy,” Matthews said, per Sportsnet. “He’s really passionate about hockey. He works extremely hard. He cares a lot. He’s been playing great over the games he’s been with us. He works hard every shift, he competes, and you can’t really ask for more. He’s got plenty of skill to go along with that. He made a couple of really nice plays tonight, and a couple of huge goals from that line.”

Now, we will see tonight if Galchenyuk can finally find the back of the net in a Leafs’ uniform. He last scored on January 19th as a member of the Ottawa Senators that were facing the same Winnipeg Jets the Leafs are playing tonight. This could be a winning combination.

As Galchenyuk continues to attempt saving his NHL career, his teammate and captain John Tavares knows he is a valuable player.

“He was drafted really high for a reason,” Tavares said.

“He’s had really good success in this league. He makes plays quickly, and great two plays on the two goals that help tie it up. Just the energy that he brings. He won a lot of loose pucks, getting first to pucks and just keeping possession and doing a lot of things like that that just help you just make positive plays and over time wear the opponent down and create the openings that you’re looking for.”

Galchenyuk has travelled a lot and was not always given a fair chance. He wore the colours of the Montreal Canadiens, Arizona Coyotes, Pittsburgh Penguins, Minnesota Wild, Senators, who traded him to the Carolina Hurricanes. He did not suit up for the Canes and ended up in Toronto where destination number seven could be his lucky charm.

Let’s see how he does tonight against the Jets!

Tkachuk absolutely embarrasses himself with a ridiculous, over the top dive

Sens owner Eugene Melnyk's pandemic yacht vacation went hilariously awful, according to lawsuit
Subscibe to
Our NEWSLETTER
Receive the best articles of the web directly in your email