This is waaaay over the line. Suspend this kid indefinitely IMO. Thoughts? 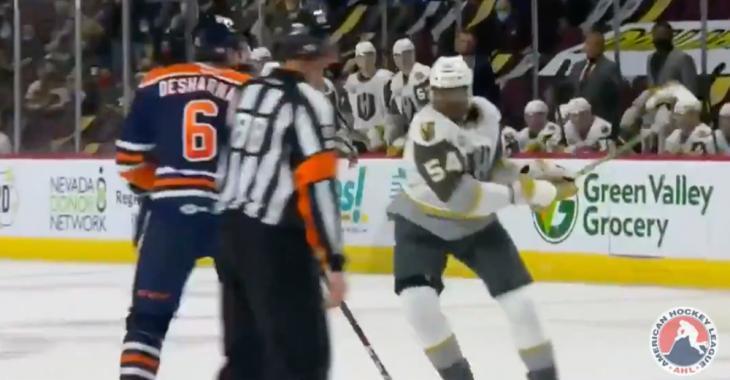 With all the talk about suspensions around the hockey world these days, with Tom Wilson dividing hockey fans and with violence seemingly escalating around the sport, it takes a moments like this one today from an AHL game between the Henderson Silver Knights and the Bakersfield Condors to really help with course correction.

That's insane. There's simply no place for this in the sport of hockey. You're supposed to drop your gloves and square up like a man, using a stick as a weapon is reckless and, quite frankly, it's embarrassing.

For what it's worth, Loewen typically has no problem dropping the gloves to defend himself. He's a hard nosed player with 55 PIMS and just one assist in 22 games with the Silver Knights this season. At 6'4", 215 pounds and with fists the size of boulders Loewen isn't on the roster to rack up points. He's on the roster to play an enforcer role and to curtail nonsense like this. Frankly, I hope he receives a stiff punishment for this and comes back to the Silver Knights having learned a valuable lesson. The fact is that he's a valuable player if he goes about his business in the right way. But, as the kids say, this ain't it...

Habs hint at changes to their lineup ahead of first round matchup against the Leafs.
Subscibe to
Our NEWSLETTER
Receive the best articles of the web directly in your email