Some folks have already talked about a suspension… but the call was overturned! 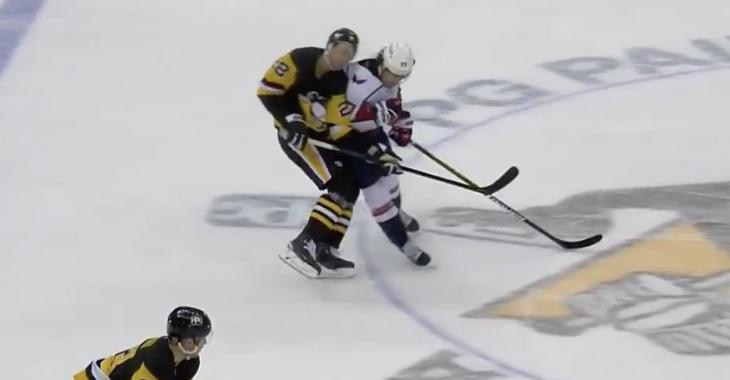 During the second period of the game between the Washington Capitals and the Pittsburgh Penguins,  forward TJ Oshie levelled blue liner Marcus Pettersson with a high hit at neutral ice. There seemed to be no doubt that this was a blindside hit that knocked the Penguins defenseman out of the game as Oshie was looking for retribution after being hit seconds prior. As soon as the hit took place, it appeared to catch Pettersson in the head.

Oshie was initially issued a major penalty while Pettersson laid on the ice being tended to by his trainer. We all expected that the Caps forward would be kicked out of the game.

However, the officials reviewed the play for several minutes – setting in motion an obscure procedural rule  that was added to the rulebook by the NHL. If you don’t remember, this is how the review rule, which was officially added in September, reads:

Such reviews will be conducted exclusively by the Referee(s) on the ice in consultation with other On-Ice Official(s), as appropriate, using the technology (for example, a handheld tablet or a television or computer monitor) specified in and provided pursuant to Rule 38.5.

As officials  reviewed the play and every angle possible, they noticed that despite Oshie’s hit being late, dangerous, and blindside, the Capitals forward hit Pettersson in the left shoulder and not the head. Pettersson’s injury occurred due to the whiplash. Therefore, officials downgraded the major penalty down to a minor for interference.

Penguins fans were adamant on social media that it should be a major, that Oshie should have gotten ejected from the game and should get suspended, however, it remains to be seen if the NHL will agree with the officials’ decision to change the penalty.

Collegiate standout goalie could become the first Seattle Kraken player.
Subscibe to
Our NEWSLETTER
Receive the best articles of the web directly in your email