This is a bold move by the Penguins’ captain… 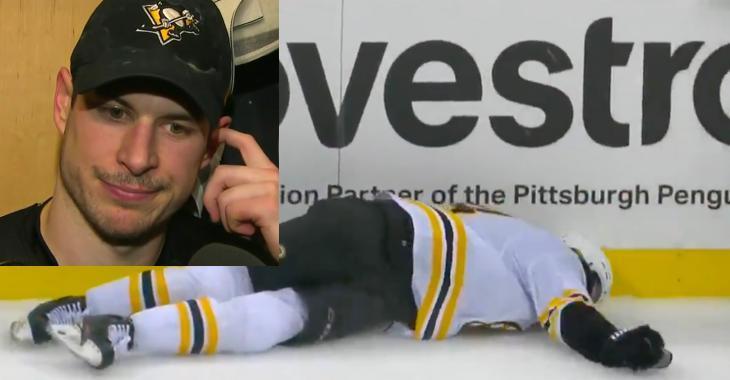 In the second period of Tuesday night’s game between the Pittsburgh Penguins and the Boston Bruins, Brandon Tanev was ejected from the contest after he hit defenseman Jarred Tinordi. The blue liner, who has a history of concussions, fell hard into the boards and appeared to hit his head quite hardly. He went numb and motionless on the ice and needed help to exit to the dressing room. The Penguins argued the call, but Tanev was ejected. This is the hit in question:

After the game, Penguins captain addressed the hit and demanded that the league brings clarity to the rules after the questionable decision from the referees.

He did however show worry for Tinordi’s health as the blue liner has been concussed more than once, like Crosby.

“I don’t think he had any intent there,” Crosby said via video conference, per the Tribune Live. “I hope Tinordi’s OK. He went in pretty awkward. But I don’t think there was any intent. I thought he hit him clean. He hit him timely as far as the puck being there. (Tinordi) did go in awkwardly, so you never like to see that. But I didn’t think it warranted a five-minute (major penalty).

“The (referees) are out there, they’re trying to protect us and keep us safe. I get it. I can see them trying to do that. But I didn’t see it that way. Unfortunately, we had to go down. We got a big (penalty) kill there. I hope he’s OK.

It remains to be seen if the NHL will listen to its star player.

This comes as some people are wondering if the Penguins and Tanev were trying to avenge an injured Evgeni Malkin. Tinordi was the one who took Geno out of the game following a hard hit in the first period.

Malkin missed time in the first frame after that as he headed down the tunnel to the dressing room, returned later but not for long as he was unavailable for the rest of the contest. This is Tinordi’s hit on him:

Crosby appeared frustrated and is hoping to get what he wants from the NHL for players’ safety.

“If they’re going to err on the side of protecting us, I don’t think I’m ever going to argue that as a player,” Crosby said. ‘Especially with Tinordi being hurt and seeing him go in awkwardly. I get it. It’s just understanding that. You see some hits throughout the league, especially in the first half of the season here, it’s hard as a player to know. We look at a hit and think, ‘Oh, that’s a suspension,’ and it’s not. Or we think it’s a penalty and it’s not. Then you see a hit like (Tanev’s), you don’t expect a five-minute major and it ends up being one.

“I think it seems like it’s a little gray right now.”

Will the NHL respond?