Players are getting flown back home as we speak! 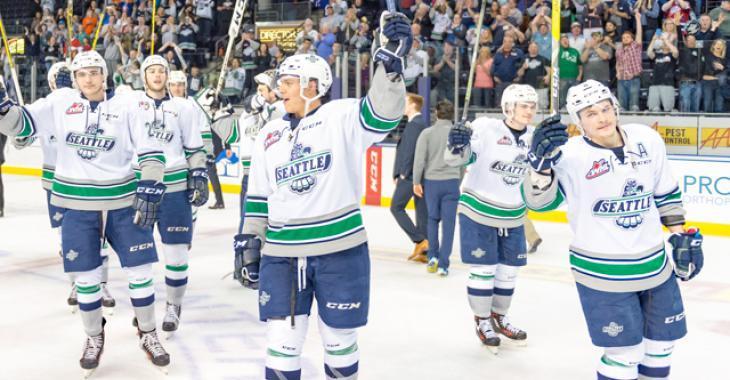 This is disgusting, but we can only be glad that the team and league acted swiftly and appropriately.

On Thursday, two teenage forwards with the Seattle Thunderbirds major junior hockey team were released for the remainder of the season for a racial-taunting incident in which the squad’s lone Black player alleged he was called a racial slur and had a banana waved in front of him.

The Thunderbirds added that the players will not return next year. They did say the players could be traded elsewhere next season.

We do not know the names of the banned players or the victim.

According to Geoff Baker of the Seattle Times, the players, age 17 and 18, were suspended for the Thunderbirds’ first two Western Hockey League games last weekend after team officials started the investigation of a complaint of racial harassment against a 17-year-old teammate.

On Thursday the team informed the suspended players they were no longer on the team and would be flown back home to Canada shortly. The 17-year-old is from Alberta, the 18-year-old from British Columbia.

Their names have been removed from the team roster.

“It’s obviously an unfortunate situation that we don’t condone,” Thunderbirds general manager Bil La Forge said in an interview Thursday. “We have a zero-tolerance policy for anything racially insensitive or bullying or anything of the sort.”

The players will not be able to be picked up by another team since the WHL trade deadline has already passed. We’re hoping no clubs would be interested in such racist players.

The victim said by text: “I am very disappointed with what happened, but I appreciate and respect the way my organization has handled this situation. That’s all I am going to say, and now I just want to focus on our season at hand.”

While it was the first time manager Bil La Forge was informed about racial slur towards the player, he found out that the 17-year-old had been taunting the victim with the racial slur since last season. “I think that anytime you have something like this and you start looking into past behaviors — something that didn’t get to my level last year might get to my level now. We heard things, but it’s tough to regulate things that happened 12 months ago. We were not aware of anything of this nature last year. And when we were aware of it, we acted quickly and decisively.”

The Seattle Times were made aware of the allegations before the announcement and expressed concern that the suspended players would be allowed back on the team as soon as next week. “The targeted player, they said, was adamant that he did not want either to return.”

While La Forge mentioned that the perpetrators had followed courses to educate themselves about racial insensitivity.

“It’s not a great situation, that’s for sure,” he said. “I’m disappointed and obviously wish I didn’t have to deal with something like this. But when it happens we have to address it, get in front of it and use this to learn and become better people.”

La Forge said he hoped “the players involved will use this to improve themselves and learn from their mistakes.”